A Lesson in Humility

I wrote this in 1999 for publication in the Southern Arizona Hang Gliding Association newsletter. LAG and I were visiting the other day. She recently visited San Diego and Torrey Pines and said she had a good chuckle remembering me pounding in, so I dug it up from the archives.

A Lesson in Humility

The summer of 1996, I happened to be in pretty good shape and I decided I wanted to do the La Jolla Rough Water Swim, a three mile open water race that starts, surprisingly, in La Jolla cove. Leigh Anne and I got some cheap tickets to San Diego on Southwest, packed our paragliders, swimsuits, and sun block and headed off to SoCal. Our buddy Evan, flight handle "Hollywood," and his honey of a girlfriend, Susan, picked us up at the San Diego airport with two HGs strapped on top. The four of us spent Friday night having fun in La Jolla. Saturday was dedicated to flying Torrey Pines.

We showed up at Torrey late in the AM and found very light conditions, but at least it was blowing in. It was so light in fact, that we were the only pilots there. At that time, Bill Bennett, a legendary little Australian pilot, was running the flight park. Hollywood and I, being well versed in HG lore, tried to visit with Bill and impress him with our dazzling fabulousness (we are HG pilots you know), but Bill was only interested in Leigh Anne and Susan. The lascivious little bastard was outright coming on to the two of them and, to the amazement and disbelief of Hollywood and I, the girls were totally sucking it up. I must say, Bill was quite the witty charmer and it really was hilarious to see him getting into his groove. Giddy with excitement, tongue hanging out, hips starting to gyrate, Rico Suave Bennett had totally captivated the girls. As Hollywood and I walked over to the cliff to check out conditions, Bill started telling the girls about all the "nekkid preverts" down bellow at Blacks Beach.

Evan started setting up a HG and I got out my PG. Conditions were light, so we were in no hurry. Leigh Anne came out with her PG and set up. Before I was hooked in, Leigh Anne was kiting her canopy over head. She turned and started for the cliff. The wind must have picked up a bit because she was having trouble walking over to launch. Bill, off watering the grass (looking very much like Carl the groundskeeper), saw Leigh Anne in action and dropped his hose and came running. Leigh Anne had taken only a few steps when Bill came up from behind her to give her a push to launch. Only Leigh Anne and Bill know what groping went on, but Leigh Anne did successfully launch and proceed to float out above Blacks Beach. I quickly joined her and we chased each other up and down the ridge for several hours. Conditions remained light and no one else launched. Imagine, two paragliders with all of Torrey to themselves. It was awesome.

At one point, conditions got really light. Leigh Anne sank out to Blacks Beach and I very nearly did as well. Just as I was about to give up, the wind picked up and I was soon well above the ridge. Poor Leigh Anne would have to hike back up and I was enjoying the best conditions of the day. As I flew over the ridge, I watched Leigh Anne pack up her glider and start up the trail. I noticed two young men near the trail, kind of off in the bushes. It looked like they had their pants down around their ankles. What the hell? A two-man circle jerk is what it was. Well, Leigh Anne was going to have quite a hike.

I had the whole ridge to myself and glassy smooth lift. It was magic. I stretched out on my back and closed my eyes. I flew back to launch and did touch and goes. I got way high and did super steep wingovers. I flew for a long time and enjoyed myself immensely.

The afternoon wore on and I figured it was probably time to go land. Leigh Anne would surely be back at launch and everyone would be hungry by now. I did a couple of flybys over launch and sure enough, Leigh Anne, Susan, Hollywood, Bill, and about 20 spectators were all hanging out watching me float around. My vision is not that great, but I was pretty sure that a large percentage of the crowd of spectators were big breasted, attractive young women, probably coed honeys from the UCSD campus. And they were all digging me. Air Stud. I couldn't help myself. I did some more wingovers. Oh yeah baby. I was feeling froggy. Time to go land. A little movie played in my head - The bikini clad coeds were all around me, jumping up and down with excitement. They all wanted me to come back to their sorority and get in the hot tub. This would be no ordinary landing.

I flew down the ridge. When I got to the launch area, I turned 90 degrees so I was flying straight down wind, over the grassy set up area. At just the right moment, I was going to go deep into the right brake, crank the wing up on the right wing tip, practically do a wingover a few feet off the ground turning the canopy 180 degrees back into the wind, and swing out of the steep turn into a super styley landing. I watched the ground coming up. It's all in the timing. You got to have the feel baby. Right about NOW!

I stuffed the right brake, felt the canopy limp, and knew immediately that I was screwed. I thought to myself, "Should I try and run this out or just take my..."

BAAAAM! My feet hit the grass. There was nothing to do but relax and let it happen.

OOMPH! My face in the grass.

My body did about three gyrations. The lines of my paraglider wrapped around me with each somersault. Finally, everything came to a stop. I heard the canopy rustling, settling over my smoldering, Wile E. Coyote body. Then, through the silence, applause. And laughter. Ah yes. That would be Leigh Anne's laughter. And that would be Hollywood's. Oh, and listen to that. Bill Bennett enjoyed the show. What could I do?

I stood up. Took a bow. Turned red. Laughed at myself. Waved to the spectators. Bill gave me a ration of good humored abused and fussed about the rut I had dug through the grass with my body. Then he said something that Leigh Anne will never ever let me forget. He said, "When you guys showed up to fly, I was worried about the little lady (Leigh Anne) screwing up but it looks like you're the one I should have been worried about." It sounds kind of harsh now, but it was actually quite funny when he said it.

The rest of the trip was fun. Leigh Anne, Susan, and Hollywood laughed at my expense, I swam in the race on Sunday morning and did quite well. We went back to Torrey Sunday afternoon, but conditions were too good and the sky was filled with traffic. The moral of this story is something my dear friend Ken DeRussy (who taught me how to fly HGs and PGs) once told me on the training hill; "When you're feeling froggy, chances are you're about to get smacked." 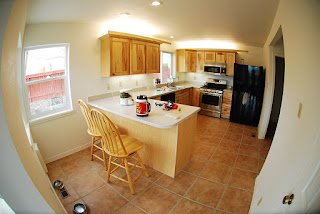 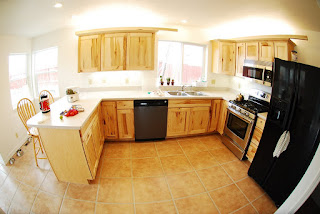 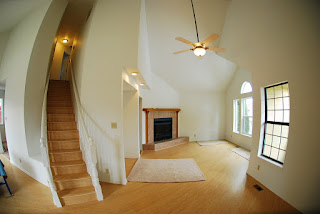 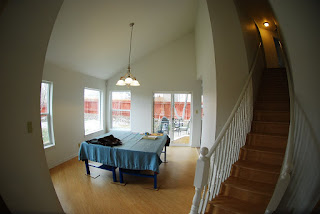 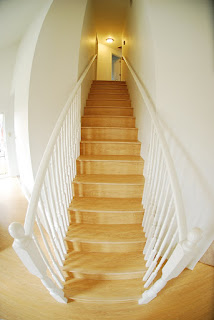 Going to make a little meditation altar where the TV is supposed to go: 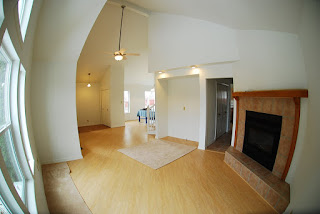 Bay windows and the entrance foyer: 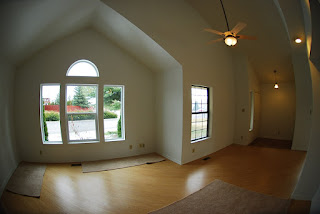 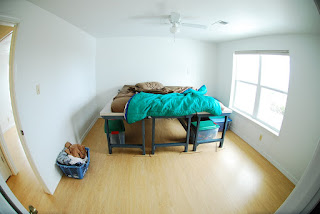 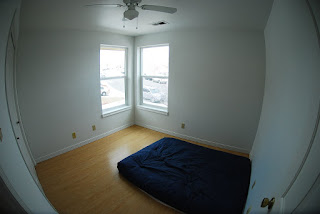 The upstairs bath that was ugly pink: 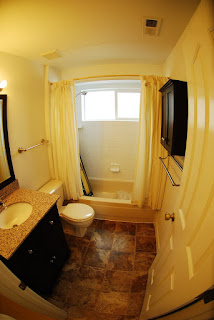 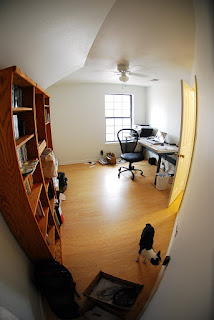