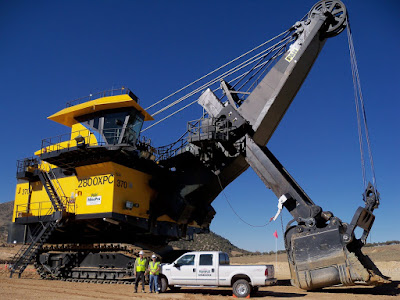 The shovel that the Top Pit Substation is supplying. One of the things I enjoy in my work is the enormity of the equipment and machinery. Somehow it is gratifying when something so large and complex actually works and works well.
0 comments

Before 9/11, before Afganistan and Iraq, before Koran burning, Aitken Roshi wrote:
Reconciliation of seemingly implacable religio-political positions that divide our world is a matter of seeing into the metaphors of the other, sharing our own metaphors, and living the truths which theirs and ours illuminate. Far deeper, and far more inspiring than the literal, the motifs of folk stories, myths and poetry are cognate the world over. When I find the words of Jesus to his disciples to be my own truths, my misunderstanding of Christianity falls away. However, if I were to treat such words verbatim and interpret them within a closed system, I would be just reinforcing the bulwarks of institutional religion and ethnic justification.
Aloha Aitken Roshi.
Where have you gone?
Who has departed?

I’ve been living in a 1978 Airstream trailer in an RV park in Elko, NV for five months. There are a lot of transient workers in Elko right now working on a big gas pipeline from Wyoming to Oregon. Pipeliners come from places like Alabama, Mississippi, Oklahoma, Arkansas. Walking through the RV park is like eavesdropping on an episode of Hee Haw. Or maybe the Dukes of Hazard, only everybody is playing Boss Hog or Roscoe P. Coltrane. No Daisy Dukes here.

I have thought of myself as a transient as well. I really didn’t want to commit to being in Elko long term. I actually like Elko during the summer, but God help me this winter. It was only recently that I emotionally committed to being in Elko. I bought a house. That’s exciting. But I also decided that I needed to find community.

Last week I went to St. Paul’s Episcopal Church. I found about two dozen old white people celebrating a contemporary service with guitar music and hymns out of a book called “Gather.” It made me appreciate St. Philip’s in Tucson. There were three women sitting a few pews in front of me. One of the women sang loudly and terribly off key. It was awful. When the deacon came out to read the Gospel, he actually looked to see who was singing so terribly and he chuckled when he identified the woman. After the dismissal, the guitarist broke into the gospel hymn, “I’ll Fly Away” and the woman ran to the front of the church near the guitarist and sang, again loudly and off key, and flapped her arms as though she was flying. Still sitting in the pew, I finally saw the woman’s face and realized that she was a special needs person. I don’t know what clinical term would describe her condition. So I sat there and watched her singing, albeit terribly, and flapping her arms. A smile broke across my face. She was experiencing joy, and she was expressing it without any shame or inhibition. It was the most pure, spiritual moment of the service.

The rector came over to say hello and noticed my fixation on the special needs woman. I don’t know what she presumed my take on the singing and flapping to be, but she offered not exactly an apology, but a very polite and socially graceful explanation of the situation. I told her that I thought the special needs woman was great and her singing and arm flapping were the highlight of the service for me. I was completely sincere.

At coffee hour, I sat next to the Buddha and with great enthusiasm she told me how excited she was to go to the Elko County Fair this week.

Another church, a Baptist group, uses the St. Paul’s facility after the Episcopal service and they started arriving and mingling with the Episcopalians. A large young woman, perhaps with special needs of her own, ate a donut and eavesdropped on my conversation with the Episcopal deacon’s wife. I was explaining how I am reluctant to self-identify as a Christian, because I find my personal convictions in direct opposition to mainstream Christianity:

Glenn Beck on liberaration theology - "You see, it's all about victims and victimhood; oppressors and the oppressed; reparations, not repentance; collectivism, not individual salvation. I don't know what that is, other than it's not Muslim, it's not Christian. It's a perversion of the gospel of Jesus Christ as most Christians know it."

The large Baptist woman interrupted and asked if I had asked Jesus to come into me. There was a very long, pregnant silence as I studied the donut crumbs around her mouth. Hoping to nip the conversation in the bud, I replied, “I am confident that Christ lives within me, as within you.” Another long pregnant silence followed.

Zen Buddhist use koans to lead students to experiential insights into essential nature. A koan might be something like this:

The Baptist asked Scott, “Have you asked Jesus to come into you?”

In retrospect, I wish I had invited the large, young Baptist woman to sit down and join us and tell us about herself. I can think of no better way to demonstrate asking Jesus to come into me.

I worked at a really remote mine site yesterday until quite late. I was driving home in the dark on a dirt road and stopped for a rabbit in the middle of the road. He froze in my headlights. There was a truck a mile behind me, and I didn't want the rabbit to get run over, so I got out of the truck to shoo the rabbit off into the sagebrush. I happened to look up, I was somewhere between 7000' and 8000', and was stunned by the Milky Way, much as the rabbit had been stunned by my headlights. I turned off my head lights so there was zero light pollution and took it in.

Tonight I stepped out of my 1978 Airstream trailer in the middle of Elko and snapped a 60 second exposure, f2.8, ISO 1600, of the Milky Way. Lots of light pollution here. 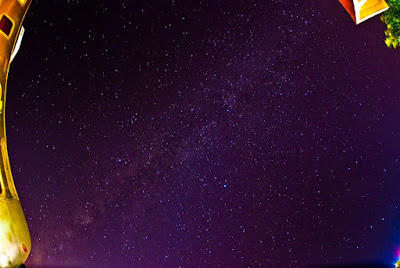 I'm planning on returning to the remote site in the next few days to make a serious effort.
0 comments