Special Ed Hileman and I headed out to Box Canyon hoping to fly our paragliders. Conditions were quite breezy from the southwest when we arrived in the LZ, so we took out time hiking up to the first knoll. 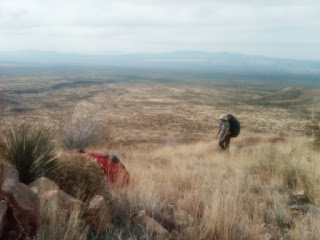 The SW winds were gusting to 22 mph, so there was no need to hike to the top. Ed and I had not flown in a long time, so we lounged about and had a nice visit while taking in the lovely view. 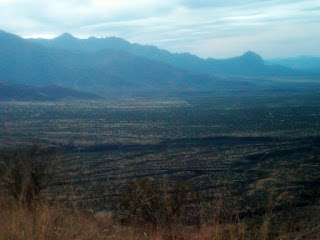 At 3:50PM, thick clouds covered the sun and the SW winds dramatically shut off. It's hard to believe how the winds can go from 22 mph to zero so suddenly. A very light breeze from the NW started flowing up the spine. Ed and I inspected various launch possibilities and checked the winds. We didn't know if the SW flow would kick back in once the clouds had passed, or if the NW flow would build, but we figured we had better get off launch while conditions were good or we would be hiking down. I launched first. The NW winds were smooth and light, the launch area was big and open (relatively speaking), and I had a clean, uneventful, float-off-the-hillside launch. In the air, the winds were right up the spine, so my westward passes were quite slow and my eastward passes were quite fast. It was a bit itchy and scratchy at first, but I slowly worked up the spine. It took me a while to make the hop from the false peak to the steep spine up to the top, but just as I made it to the upper spine, Ed pulled up and stepped off the first knoll.

Ed had the same experience as I and slowly made his way up the spine and eventually joined me a hundred feet or so above the top of Box. Conditions continually improved as the wind direction clocked around to almost due north and the velocity became more constant. We were having no problem ridge soaring and we were both flying with quite a bit of brake, so penetration was not an issue. At some point, the whole bowl in front of Box went off and we could fly almost anywhere in rising air. We both flew way out in front, until we felt the rotor of the ridge on the north side of the bowl, and way back to the peak behind the hang glider launch.

I flew over to the peak behind the hang glider launch and thought to fly north along the spine that leads to the east-west ridge on the north side of the bowl, but found the air to be a bit trashy and sinky, so I headed back into the bowl and climbed all the way back to the rock outcropping.

As the sun was setting, my body was shaking with cold, so I headed to the LZ. Not being current, I opted for a very conservative downwind-base-final approach and had an uneventful landing near the wind sock. Ed followed me in and I clicked a few photos of him with my crummy Blackberry camera. 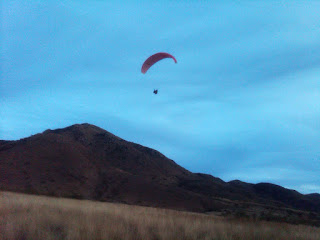 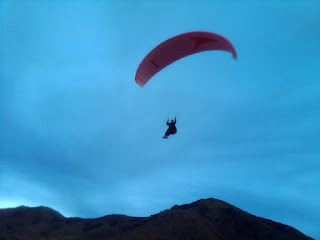 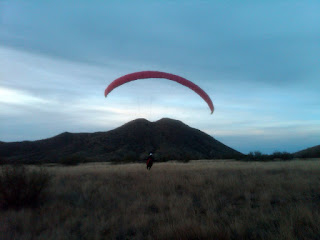 As we packed up, the sky exploded in the sunset, as it only does in SoAZ. 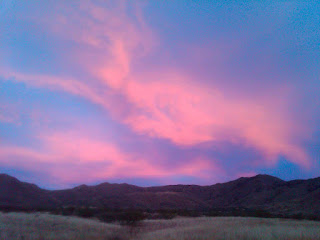 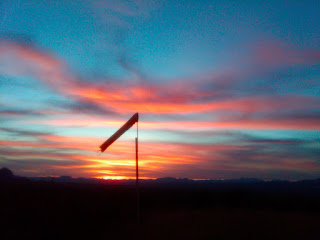 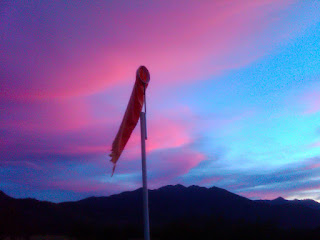 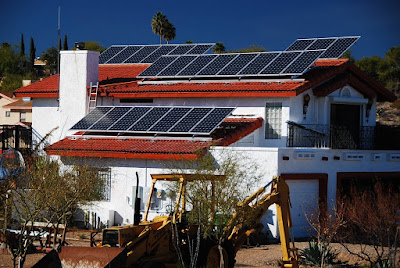 I just put 6.5 kW of PV on my house in Tucson. I am so frugal with electricity, the PV system should generate more power than I consume, so I'll wind up putting power back on the grid.

Next, an electric car. 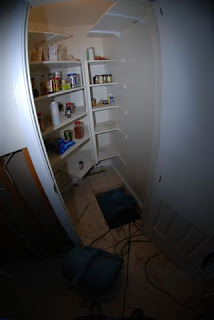 Blowing air into the crawl space to try and dry it out. Huge mold colonies found below. 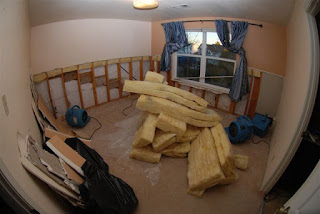 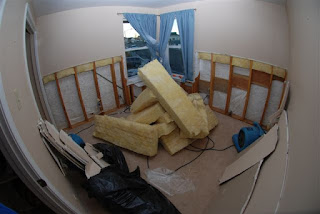 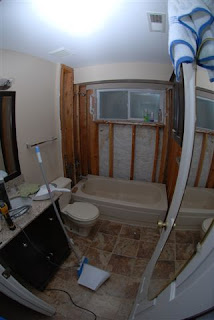 The guest bath with the bath tub in the pop out that froze. 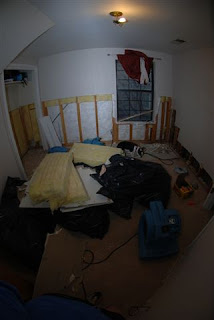 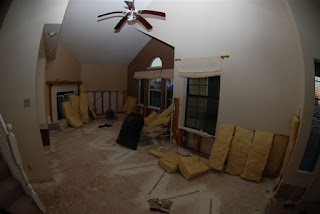 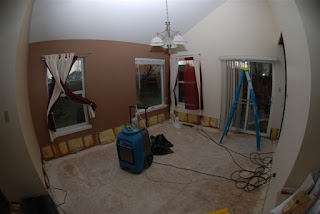 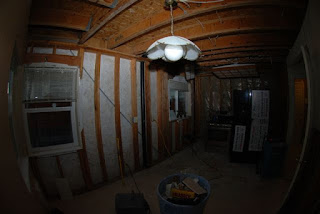 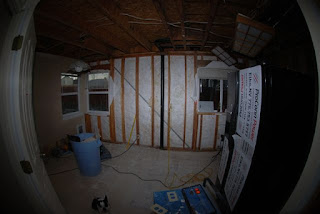 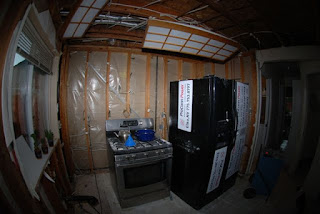 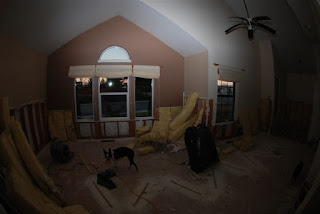 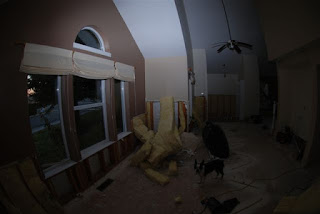 Truck-a-saurus is about to become Borrego Cimarrón. Final assembly has begun.

Life as a House

My house in Elko has a "pop-out" on the second floor: 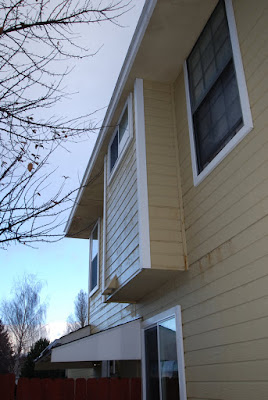 Inside this "pop-out" is a bathtub: 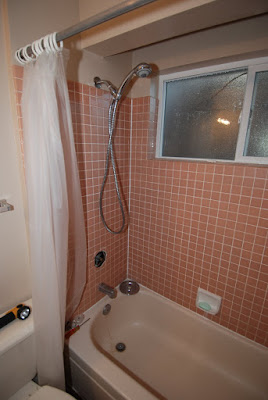 On November 24, the high temperature in Elko was 15F which was lower than the record 20F recorded in 1931. On November 25, the low temperature in Elko was -14F which beat the previous record low of -9F recorded in 1898. I was in Tucson at the time enjoying sunshine and warmth and Thanksgiving with Mom and Dad. Unfortunately, the copper water pipes that feed my bathtub in the second floor pop-out froze and burst. When I returned to Elko the evening of December 5, I found my house to be something of a disaster. My kitchen: 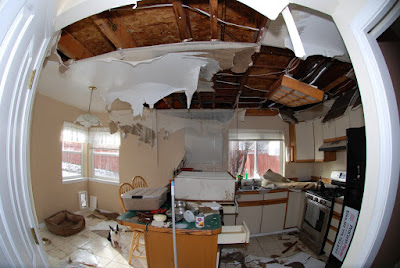 The crawlspace under my house was completely flooded: 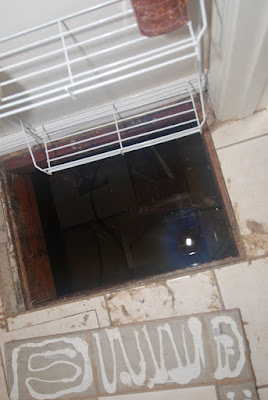 Here is what a copper pipe freeze-burst looks like: 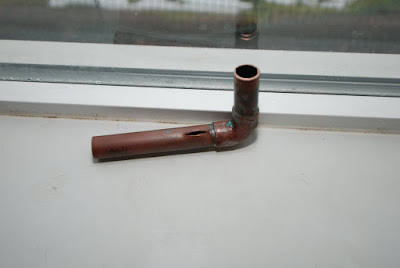 My wood floors are buckling as they dry: 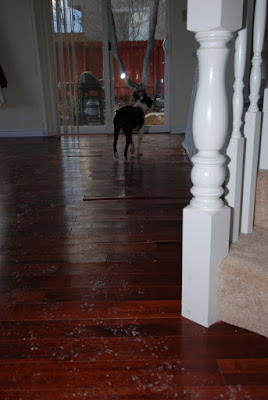 The damage is quite extensive. I have a water-damage-remediation-contractor demolishing most all of the walls and floors. It will be another week or so before we know the full extent of the damage. 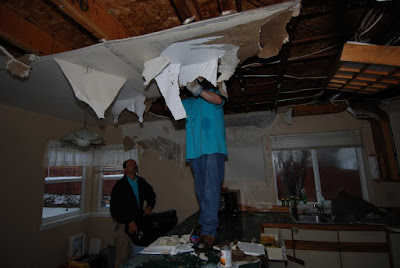 I am not quite ready to wax philosophical on this experience as I am still in the thick of it, but a thoughtful friend reminded me today that my favorite story is The Alchemist by Paulo Coelho. That gave me some good perspective.

The Problem with Engineers

If you can see the end from the beginning, you are not exploring. Exploration, by definition, is venturing into the unknown. - Sarah Vular (paraphrased) on the problem with engineers.
We are out exploring.
www.footfinandfeather.com
0 comments