I have a large framed photo of Jane Goodall hanging in my bedroom in Tucson. It is a remarkable image. Jane is greeting a caged chimpanzee named Jou Jou. She has bowed her head and Jou Jou has reached out with her very anthropomorphic hand to gently touch Jane's forehead. Jane’s hair is backlit, giving her an angelic aura. Under the image, inside the frame, is a quote from her book “Reason For Hope”:

Together with the chimpanzees and the baboons and the monkeys, the birds and the insects, the teeming life of the vibrant forest, the stirrings of the never still waters of the great lake, and the uncountable stars and planets of the solar system formed one whole. All one, all part of the great mystery. And I was part of it too. A sense of calm came over me. More and more often I found myself thinking, “This is where I belong. This is what I came into this world to do.”

Handwritten under the quote is a personal note from Jane:
For Scott –
Find where you belong – and then you will know what you came into this world to do.
And follow your heart.

This morning as I dressed for work, I stood in front of the photo and read what Jane had written. I promptly forgot about it as I ran out the door, late for a downtown meeting with a client.

I had lunch today near the U of A with a friend that is a professor in the school of business. When she arrived at the restaurant, I spontaneously announced that I was planning to apply to the PhD program at the Scripps Institution of Oceanography in January of 2014. I told her the world of academia was foreign to me and I was intimidated. I asked for her help and guidance. She had all sorts of wonderful ideas and connections. It was an encouraging conversation.

This evening, I was at home on the phone with another friend, recounting my lunch conversation. Oddly enough, I happened to be standing in front of the photograph of Jane Goodall during the phone conversation and I remembered pausing in the morning to read Jane’s words. It struck me that my spontaneous lunch announcement was rooted in Jane’s inspiring words, but the more I thought about it, the more apparent it became to me that I have been moving in this direction for many months, unconsciously letting go of all sorts of unconscious beliefs and attachments.

Gautama Siddhartha, before he went off to become the Buddha, named his son Rahula – fetter. When I look at what I have achieved and accumulated over the last 20 years, motivated by my unconscious beliefs and attachments, I now see fetters, overhead. Gautama jumped on his horse, Kanthaka, and in a night, rode away from his commitments and responsibilities. He clearly did not feel responsible for the emotional well being of anyone other than himself.

I feel very stressed this evening. My life is chronic scarcity; never enough time, money, expertise … We are an insatiable society. My clients are unhappy, my employees are unhappy, and everyone wants me to fix things, to put the world in order for them, to make them happy. And to be fair, I more or less market myself as the engineer that can do that; fix your problems, make you happy. My value to society is in servicing the needs of others and I am attached to being externally validated.

My sailboat, the one I am going to live on in San Diego Bay while I study at Scripps, the one I will sail to the south Pacific to do my exploring and make documentaries, I am going to name it Kanthaka. 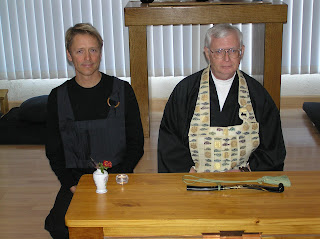 I recently did the Jukai ceremony. Part of the ceremony is the public “taking-on” of vows and precepts. My Roshi instructed me to make a brief re-statement of each vow and precept in my own words. Here is what I said:

I take refuge in the Buddha. Luminous Venus in the evening sky, behind saguaro silhouettes. Wonderful! Wonderful! Now I see how radiant we all are!

I take refuge in the Dharma. Truth and reality are more subtle and mysterious than the imaginary forms I conjure to explain what I cannot know.

I take refuge in the Sangha. Practicing harmony in community, I confront and reconcile my internal conflicts.

I vow to maintain the precepts, especially when Mara sends his three lovely daughters to seduce me.

I vow to practice all good dharmas and save the world with my good karma.

I take up the way of not killing. Nan Chuan has the cat by the scruff of the neck and his knife at the ready. Please oh please oh please let me give a turning word.

I take up the way of not stealing. Apparently I cannot possess even my own self.

I take up the way of not misusing sex. I strive to be honest with myself and transparent with others.

I take up the way of not speaking falsely. Nothing to defend. Nothing to promote. Of what use is deceit?

I take up the way of not giving or taking drugs. No escapism. I choose the searching and fearless moral inventory.

I take up the way of not discussing the faults of others. Is it the fault of another I see, or is it my own reflection?

I take up the way of not praising myself while abusing others. I see now that the freedom to live is found by forgetting the self and being of service to others.

I take up the way of not sparing the dharma assets. From a world of scarcity comes the duality of yours and mine. I choose to create a world of abundance.

I take up the way of not indulging in anger. May my anger invigorate my pursuit of the Eightfold Path.

I take up the way of not defaming the three treasures. BUTSU DO MU JO SEI GAN JO. 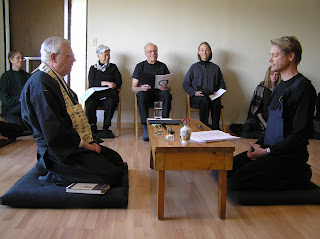 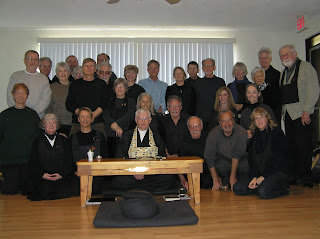 The ceremony was on Rohatsu at the conclusion of a seven day sesshin. It was a great blessing that most of my spiritual family attended the ceremony. 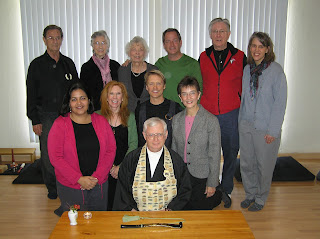