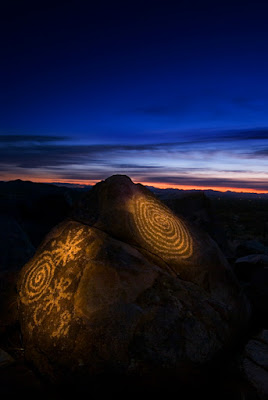 I was dutifully sitting at my computer yesterday working away when friend Tara called and suggested we go to see the snow on the Catalinas. Eager to get out of the house and away from the computer, I jumped at the offer but suggested we go to Signal Hill on the west side of the Tucson Mountains. The Hohokam left petroglyphs in the rocks there that some people think correspond to solar and lunar cycles. The winter solstice was just a week ago, so it seemed an appropriate time to visit (given that I am always late to everything). I took my D80, my 12-24mm, my tripod and a flashlight. We had to wait until after sunset for the Japanese tourist to clear out but I finally set up and experimented with "painting with light." I was pleased with the results. You should see the 10 MB version.

I had to pay my 2006 estimated taxes the other day and it was a painful experience, not only because it was a big chunk of change, but because my tax dollars subsidize such foolishness as the war in Iraq, the war on terror, the war on drugs and the idiotic border fence.

I awoke this morning to the news of the hanging of Saddam and I immediately thought of a book I read several years ago by Walter Wink called The Powers That Be. Wink explains The Myth Of Redemptive Violence, starting with the Babylonian creation myth, and then proceeds to blow holes in it.

I know a few people who intentionally earn less than the minimum taxable wage so that they will not have to subsidize our collective violence. The price is too high, but bourgeois comfort and security is the siren's song and when you find yourself foundering amidst the rocks, what do you do, abandon ship? Ah look! Someone long ago carved pictures into the rocks!

I comfort myself by meditating on the transient nature of all things. We too shall go the way of the Babylonians and the Hohokam. I just hope we don't take everything else with us.

My father was outlining a way to stop border issues by rejuvenating Mexico's economy & relying less on China. He was becoming inscensed about the perilous state of our own economy & ecology, and I shrugged & told him America was going down, we just needed to minimize our personal impact on the environment. He did a double take & lapsed into uneasy silence.