It is my favorite time of the year in Tucson - Monsoon season.

I did a 12 mile run this morning in the desert behind my house, in the foothills of the Tucson Mountains. At 6AM, I was the only person on the trails and the sun was just above the horizon, illuminating the Tucson Mountains with that magical low angle warm light. As I trotted along in my minimalist sandals, the only sounds I could hear were my own footsteps and my breathing. About three and a half miles in, I came upon a good sized buck with 18" antlers all in velvet. He bounded away through the scrub as I continued running up the trail. In the moment, what struck me as remarkable was how silent was his bounding. All I could hear were my own footsteps and breathing, even as he effortlessly, gracefully, bounded through the brush. Usually when I flush a deer, I can hear their hooves thumping the ground, but this guy was so quiet, it gave a surreal quality to the experience, as though it wasn't real.

The clouds developed late in the day and it finally started raining after 5PM. For years I have been hoping to catch a monsoon sunset at Signal Hill, with the sun illuminating the bottom of the clouds from below the horizon. Today's sunset wasn't quite what I had in mind, but it was beautiful. There was some spectacular lightning, but I only managed to catch these two bolts on the horizon just above the spiral petroglyph. 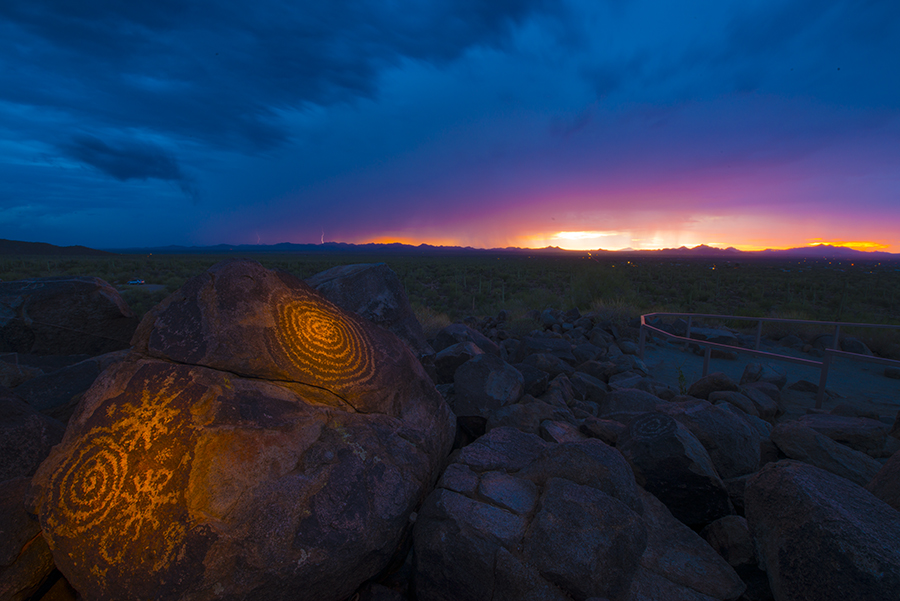 It seems if one really wants to do nature photography, one has to arrange to be out in nature for most every sunrise and sunset. Not a bad arrangement.