We Think with Words

There is a beautiful 80 foot waterfall in the jungle of Gombe Stream National Park in Tanzania. After a good rain, when the stream is running hard, Jane Goodall’s famous chimpanzees make pilgrimages to the waterfall and perform magnificent, ritual displays. As they approach the waterfall and hear the water crashing down on the rocks, their hair bristles, indicating excitement. They stand upright and rhythmically sway left and right. “They pick up and throw great rocks and branches. They leap to seize the hanging vines, and swing out over the stream in the spray-drenched wind …”2 After the display, they sit meditatively on streamside rocks and watch the water flow by.

Years ago, my friend Glenn blew a launch at Miller Canyon near Sierra Vista, Arizona. For a hang glider to fly, for it to create lift, it needs a certain amount of wind flowing over the wing. If there is not adequate wind, or if the wind is not laminar over the surface of the wing, the wing is “stalled” and it basically falls out of the sky. Glenn ran off the side of a cliff with his wing stalled, so instead of flying away into the canyon, he fell and hit the cliff until his wing lodged on some scrubby desert bushes on a small ledge. Glenn died from the trauma of impact. Search and Rescue recovered his body, but they left his hang glider on the side of the cliff. The glider was impaled on the trunks of the scrubby bushes and for those not familiar with the mechanics of a hang glider, disassembling a glider is not an intuitive process. The U.S. Forest Service manages this particular area of wilderness and they determined that our local hang gliding club was responsible for removing the glider.

I was the only club member that had climbing equipment and experience. The president of the club had a friend that was an experienced spelunker, so the following weekend, the two of us secured our ropes to anchors (automobiles) at launch and dropped over the cliff to recover the glider. It was June in southern Arizona, so it was hot, but I estimated it would only take us an hour or so to break down the glider and haul it up the cliff. We carried no water.

The wings of a hang glider are made from a super tough fabric, but we found that the gnarly branches of the scrubby bushes had impaled the wing so that lifting the wing off the branches was impossible. I had to cut the fabric around each impalement and cut the branches off below the wing. The ledge was tiny, only a few feet deep, so to fold the wings together we had to guy the nose of the glider out into empty space. The process took hours.

In the midst of the struggle, there was a moment, a mystical experience I shall never forget. My partner was standing on the inside of the ledge with his back against the cliff wall. I was on the outside of the ledge bent over at the waist struggling with the glider. My heels were hanging in the empty space of the canyon and my toes were pointed toward the cliff. We were both secured to ropes, so falling off the cliff was not a concern. It was hot. We were dehydrated. My back was quite fatigued from all the lifting and working bent over. As I struggled, a thermal rolled up the cliff. The hot, dry air blew across my sweaty body. I stood up erect and relished the relief of evaporative cooling. My back muscles relaxed. I gazed into the cliff at my partner standing there facing me and a giant yellow butterfly, with wings as big as my hands, hovered, fluttering above his head.

This was the experience: My mind was empty – there were no words, no thoughts. On some unconscious, emotional level, there was a background of grief for the loss of my friend. There were the sensations of muscular fatigue and relief in my lower back; the sun burning the skin on my arms and legs and the back of my neck; the coolness of my sweat evaporating in the hot, dry wind; thirst and the parched mouth of dehydration. There was the vision of a giant yellow butterfly fluttering above my partner’s head. Time slowed and I watched in a quiet, peaceful calm. After hovering for a moment, the butterfly departed my partner’s head and flew straight toward me. I continued to look straight ahead at my partner. I didn’t need to follow the butterfly’s path because I intuitively gnew (as in gnosis) that it was coming to hover over my head. The butterfly exited the top of my peripheral vision and as it paused over my head, there came a perfect, eternal moment of blessing, of union, of unity, of peace. I could only describe the experience metaphorically, but in the moment, there was no need to describe, to use words, to think, because everything in the universe was exactly as it was supposed to be, and there was nothing to say or even think.

My partner noticed the butterfly and said, “Hey! There’s a butterfly over your head! Glenn has come to say goodbye!” As his words penetrated my ears and my consciousness, my grace-full moment of enlightenment collapsed. I fell out of heaven. My consciousness moved from my right brain into my left brain and the first words my left brain assembled into a thought were, “You idiot! Why did you have to open your mouth?”

Of all the hours I have spent meditating, one sit in particular was quite remarkable. I was living in Honolulu at the time, practicing zazen at the Palolo Zen Center. One afternoon, I went for a solo 2.4 mile swim in the Pacific Ocean in front of Waikiki and then went to the evening sit at the zendo. Sometimes a 25 minute sit seems to drag on forever, but this particular evening, the 25 minute sits felt like 25 seconds. From the moment I sat down on my zafu, my mind was quiet, peaceful, empty. Everything in the universe, and my place in the universe, was exactly perfect. I was at once differentiated and undifferentiated from everything else. I was at once this little body sitting on this zafu and the turtles in the ocean and the boundless expanses of the universe. “Do I contradict myself? / Very well, then I contradict myself, / (I am large, I contain multitudes.)”3 There were no thoughts, no words, not even images in my mind. Just a feeling of expansive calm.

A monk asked Chao-chou, “Has the dog Buddha nature or not?”

“Only Mu in the whole universe” he replies. He looks straight into my eyes. “Show me” he commands.

There is a way of being that I have glimpsed. It is pre-verbal. It might be full of sensual and emotional experiences, but those experiences are not explained or described, they are simply felt. It is characterized by feelings of calm regarding the current state of affairs and one’s role in the grand spectacle, feelings of inter-relatedness to everything, feelings of compassion for everything. The calm of this way of being is so pervasive that action in the world and life is spontaneous and uninhibited.

How do I show you that I am a chimp at the waterfall? 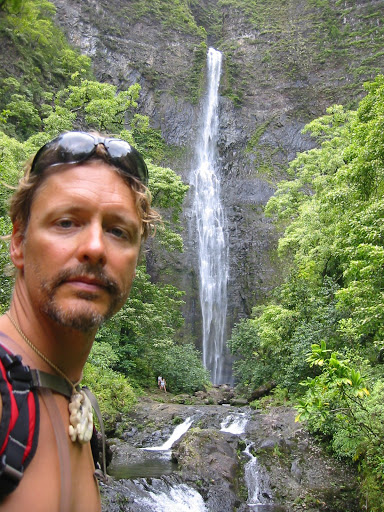 1 Jane Goodall interviewed on To the Best of Our Knowledge.
2 Reason For Hope, A Spiritual Journey by Jane Goodall
3 “Song of Myself” by Walt Whitman
4 The Gateless Barrier (Wu-Men Kuan) translated by Robert Aitken, Roshi

Maybe it's true: the more extreme the experience, the more complete the insight. But each person's extremity is his own, hard to calibrate. Some insights come for me out of tediousness, even boredom. I came across it by accident, going somewhere else. And I can never repeat it.

You write and observe so well, so right, so open. These accidents of insight with butterflies could make you accident-prone. Many thanks for the blog. Brad

Beautifully written. You do write and observe well. Angela

You are both very kind. Ben's Bells to you both.