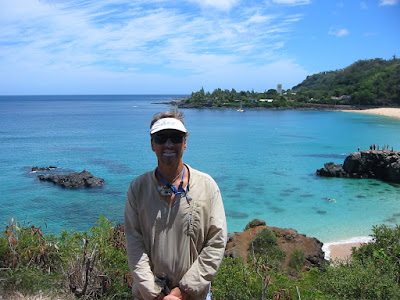 We are about to depart Waimea for the all night channel crossing.

This morning, I got up at 6:30 (!) and went for a swim around Waimea Bay. In the last few days of swimming here, I have only seen two big rays. I don’t recall the name of the first ray – fiddle head or guitar or something like that – and last night a big spotted eagle ray. The eagle ray swam up to look at me as I swam down to look at him. After my swim this morning, Angela and I went to shore. As we swam in, a pod of spinner dolphin swam into the bay. We stood on the beach for half an hour watching them leap out of the water doing their characteristic spin. Several folks tried to paddle out to the pod, but the dolphin stayed a safe distance away.

Angela and I then walked about two miles to a beach where big green sea turtles haul out to sun bathe. There was one turtle laying on the beach and several others munching on algae in the shallows. We walked back to Waimea, stocked Islandia with water and are now getting ready to sail away. The trip could take anywhere from 12 to 24 hours. 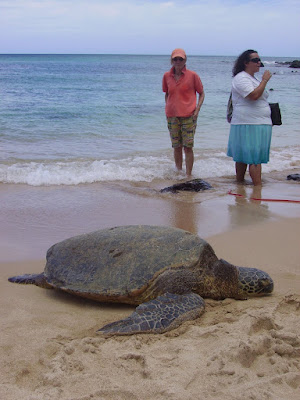 Angela sneaks up on a stealthy green sea turtle.