When I left the (perceived) security of my corporate job to join PowerPlus and go to Hawaii, I made a point of presenting a cool, relaxed persona to my friends and associates. In fact, I was overwhelmed with fear, like a deer in the headlights. I remember waking up in my Waikiki hotel room the first Saturday I was alone in Hawaii and thinking, "Oh my God, what have I done?" I wish I could have dealt with my fear in a single, conscious effort, but in fact, it was an unconscious process that lasted the entire year I was in Hawaii. (In truth, confronting my fear continues even today.) In retrospect, I lament that the paralysis I suffered in Hawaii inhibited my experience and enjoyment of Hawaii. Fearful people hunker down. Fearful people do not take risks.

But simultaneously, I recognize that I was quite successful in Hawaii, and I am grateful that my ego is so functional and capable of auto piloting through the profane life, even while I am spiritually terrified.

I think the spiritual terror is rooted in insecurity, self-doubt, self-loathing, a lack of self-love. The spiritual athlete is so confident in his wholeness, he has such trust/faith/belief in his completeness, the spiritual athlete need not be attached to stability, security, comfort, external validation, even his own intention. Insecure people are so preoccupied with being externally validated, they are unable to see opportunities, unable to follow their bliss, unable to focus their attention outside themselves.

My grandpa had an amazing life. In the mid 1930's he was a US Marine protecting American business interests on the Yang Tse River in China. He was there in 1937 with his camera when the Japanese invaded and raped Nanking. He was at Pearl Harbor the day of the attack. He did top secret surveillance of the Japanese all over the South Pacific.

I remember a summer day from my childhood. Grandpa was babysitting my sister and me. I was lying on the bed. Grandpa was sitting at his desk (the desk that is now in my home office in Tucson), sorting through black and white photographs. Some of the photos he put in an album, but most went into a small trash can at his feet. I looked at some of the photos. They were not very interesting - Japanese soldiers in uniforms running through Chinese streets with swords raised, portraits of Chinese peasants, buildings on fire. "Why are you throwing these pictures away?" I asked my Grandpa.

"Some things are best not remembered." he answered.

Of course, I was a child and lacked the capacity to relate to or appreciate my Grandpa's life experience. It was a decade after his death before I had any awareness of "The Rape of Nanking." I did get to spend time with my Grandpa when I was a young man in college, but I was so terribly self absorbed, so preoccupied with obtaining external validation, I had no time to listen to the little old man.

Wouldn't it be wonderful to have a conversation with my Grandpa today? I would ask him to tell me his stories and I would listen and imagine him as a young man, perhaps a lot like me, and I would see reflections of my self in his stories.

So my father put himself through his undergraduate studies in the ROTC. When he graduated, the Air Force wanted to deploy him to San Antonio. Having grown up in Austin, he didn't think that was a very exotic assignment, so he went to complain about the assignment. As he explained to the CO that he wanted to see the world (reminds me of Jimmy Stewart in It's a Wonderful Life), another young man came in and complained that the AF was going to send him to some God forsaken place called "Turkey." In my mind's eye, I see the CO taking the deployment letters from the two young men swapping them and handing them back.

So Dad deployed to Turkey and found himself very alone. He called up his high school and college sweetheart and suggested she come to Turkey, get married, and live happily ever after. So my Mom flew across the Atlantic and they were married in Athens, Greece. They lived in Izmir, Turkey and in Libya. They travelled all over the Mediterranean, the Aegean, North Africa, the Holy Land, Lebanon, Egypt. Dad left the Belgian Congo three days before the civil war started that created Zaire.

After four years of adventure in the Middle East, Mom put Dad through graduate school. Their plan upon graduation was for my Dad to get a job with a big international company, start a family, travel the world and expose the kids to different cultures and languages. My sister and I were supposed to go to the American University in Beirut. Of course, this was 1965.

Dad went to work for Dow Chemical and for 30 years, we never left redneckville - Lake Jackson TX. You can imagine how unsatisfying this was, especially for my mom. Our house was filled with artifacts from my parent's travels. I think we even had a big brass hookah in the living room - Mom and Dad had a bong. I grew up listening to stories of their adventures and the magical place called Turkey.

And here we are, 45 years later, on a pilgrimage to the magical place. Mom and Dad will tell their stories. I will listen and imagine them as young people, half my age. I will see images of my self reflected in their stories. This is an amazing opportunity. I anticipate miraculous transformation and I am grateful that life has brought me to this moment. 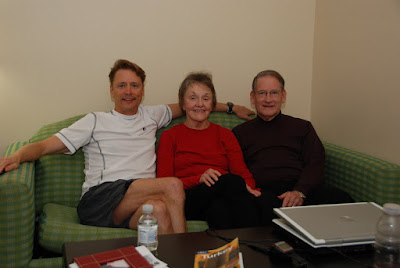